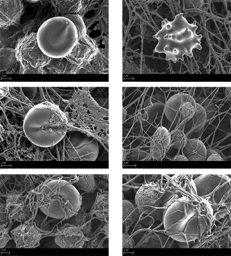 Project Goal: To use scanning electron microscopy and confocal microscopy to search for, image, and characterize possible coagulation (microclots) in the blood of patients with ME/CFS. The team will also test the ME/CFS blood for circulating inflammatory markers that can activate platelets as part of blood clotting cascades. These including LPS, amyloid, viral proteins, and gingipains (proteins created by certain bacterial pathogens), CRP, and a range of inflammatory cytokines.

They will additionally scan the blood to see if hydroxyl radicals like iron can cause red blood cells to lose their normal disc-like shape (to become eryptotic), and this deformability will also be characterized by scanning electron microscopy and confocal microscopy. Eryptosis is a form of programmed cell death that prevents red blood cells from optimally carrying oxygen, allowing them to become trapped in small blood capillaries. This can lead to blood vessel complications, and possibly poor extraction of oxygen from associated tissue.

The team performing the analysis is well-known international team that has spent decades perfecting the tools and methods needed to best study infection and inflammation in blood. They have published several important papers on the topic in Parkinson’s disease, Alzheimer’s disease and other chronic conditions. One team member was even appointed Commander of the Order of the British Empire in 2014 for his contributions to science.